Nova 3 Engineering Ltd. has worked on thousands of different projects across principally Western and Northern Canada.  These projects range in scope and complexity from smaller residential projects to large commercial and industrial projects.

Below is a brief description of just a few of those projects.

Located on the west side of Winnipeg next to Winnipeg James Armstrong Richardson International Airport this 8.9 hectare site is home to Canada Post’s state of the art mail Processing plant which opened in 2010.

One of the most recognizable landmarks in Winnipeg, the Fort Garry Hotel first opened its doors to the public in 1913, over a century ago.

Over the years various renovations and upgrades have been done to the building and its infrastructure many of which Nova 3 has been involved in. This is an excellent example of work done in a historical building.

Located on the south side of Osbourne Village, the Bus Rapid Transit (BRT) station & serves as a main hub for the first phase of Winnipeg's bus rapid transit network.

The BRT Osborne Station was designed architecturally to be a see-through structure.  Maintaining clear visibility through the space from all regularly occupied areas outside was a requirement for the mechanical systems.  This was a challenging requirement since diesel buses produce exhaust with significant amounts of oil laden particulates along with it's regular odor and harmful gases.  A suitable exhaust system would need to work well under a wide variety of conditions to capture varying exhaust rates during bus acceleration and under braking, as well as capturing the extra particulates from sub-optimally running engines, all while seeing significant interfering airflow from bus movement and pass-through wind.  Upon evaluating all of these conditions carefully, Nova 3 Engineering designed a unique hood to capture all bus exhaust close to the point of release.  As a result, the clean aesthetics of the building, the safety and comfort of waiting patrons is maintained.

A kilometer or two south of the Osborne Station is the BRT tunnel. The BRT tunnel is the only vehicular tunnel in Manitoba.  At a length of 190m, it required a very specialized lighting design.  Length, orientation, traffic volume and speeds, service levels, wall and ceiling treatment, roadway type and more all contributed to the design of the tunnel lighting to enable a motorist to maintain speed and safely navigate. Working together with the City, lighting supplier and local representative RD Sales, Nova 3 completed a design that when implemented resulted in a very functional lighting and control system.

Located in the heart of downtown Winnipeg, only 2 blocks from Portage and Main and the Bell MTS Place, the Pint Public House is an excellent example of retrofit to suit an older existing building.

This building required the complete retrofit of two buildings to contain the establishment now there in.  The designs included all new natural gas services, roof mounted HVAC equipment, commercial kitchen and domestic water system along with upgrades and retrofits the existing sanitary system.  Two new washroom groups were added to accommodate the higher occupancy, and a central bar was added on both the main and second floors.  Each floor is heated and cooled by separate packaged rooftop units.  Extensive consultant and trade coordination was required to accommodate the age and configuration of the existing structure in both the design and construction phases of this project.

Located on Westminister Avenue in the picturesque Wolseley neighborhood of Winnipeg, Yoga North is a more classic example of a building retrofit.

The designs included new roof mounted HVAC equipment to provide appropriate ventilation, heating and cooling to suit the comfort of the occupants along with upgrades to the existing sanitary system. 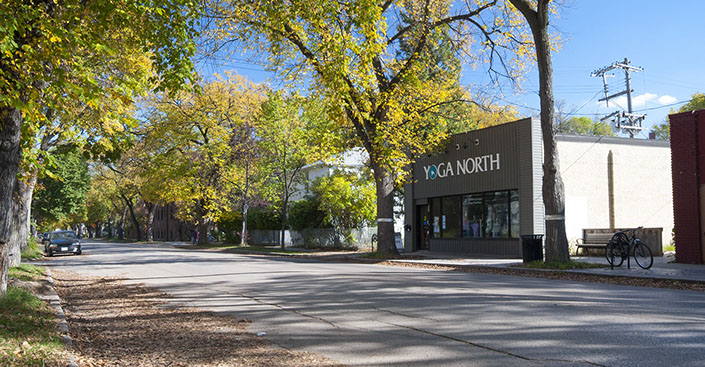 In downtown Winnipeg, nestled between the Exchange District and The Forks is Shaw Park, home of the Winnipeg Goldeyes, an American Association baseball team.  This stadium was constructed in 1999.

Subsequently Nova 3 was involved with two additions and numerous upgrades to the facility including commercial kitchen and elevator upgrades. Sports facilities, such as Shaw Park, are unlike most other buildings with unique lighting and infrastructure requirements.